The ‘Museum Secret Entrance’ is one of the puzzles of the museum, and consists of two simple puzzles.

This puzzle, which is two simple puzzles. The first part involves raising the bridge, while the second involves opening the hidden entrance.

The first part of the puzzle involves the raising the bridge. This is done at the gazebo. In the gazebo is the controls for the bridge. The panel is opened by a three digit code which is actually found in the mailbox. While the code is only two digits, this implies that the first digit is zero. Since there is ten possibilities for each number, there is one thousand possibilities for the combination. The code makes finding the correct combination extremely easy.

Once the panel is open, there are six gears, three black, three white, and eight pegs, which are three white, three black, and two gray. To complete this, one must put the gears on the correct color posts, but in only seven moves. This is done by moving the gears one at a time, the first move to a place holder. To solve this, best move is to move one of the edge ones to a place holder, than alternate between the black and white gears to get them all into place. Once this is done, you turn the crank, and the bridge raises.

The second puzzle is located on the ground of the Stonehenge replica. The central circle of the replica is divided into six equal sections. Each section is a different color, and has a symbol on it. The sections can cycle through six different symbols. That means there is a total of 46656 combinations to work through. This could be cut down if it is assumed that each symbol could appear on only one panel, dropping the total of possible correct combinations to 720.

Thankfully, this puzzle is made easier to solve if you pay attention to the grounds. At six spots in the courtyard area, there are symbols, each set in a particular color. These colors match up with the panels in the Stonehenge display. This means that it will be easy to figure out the correct combination. In fact, the more symbols you take notice of, the easier it gets. Also, once the correct combination is put in, the panels slide apart, allowing access to the hidden way into the museum. 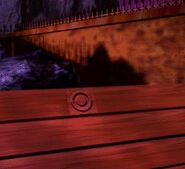 Retrieved from "https://shivers.fandom.com/wiki/The_secret_entrance_of_the_museum?oldid=4684"
Community content is available under CC-BY-SA unless otherwise noted.