Beth Ann Nelson is one of the people mentioned in the game ‘Shivers‘, and one of the Ixupi‘s victims.

Beth Ann Nelson was a native of Mt. Pleasant, Ohio. While her exact date of birth is not known, it is most likely some time between June of 1963 and June of 1964. She is a brunette, and wears corrective lenses.

Both of Beth’s parents are alive, however they had divorced prior to the events of Shivers. Her mother, Rachel Nelson, has custody, and works to take care of her daughter. Her mother also has a job at Bob’s Tavern.

Her father remains unnamed, but he left town when they divorced. He has remarried to a woman named Sylvie, whom Beth does not like. Beth does have a phone number for her father, however the area code appears missing, or left off intentionally. His job is unknown.

Beth is a student at Mt. Pleasant High School. At the time of her death, she was a junior. She excelled at Math and Sciences, however her weak subjects are Spanish, Literature and Physical Education. The former, she would better in if she applied herself, but the later classes she would not attend or show up late. She has even used forged notes to get out of Physical Education, and possibly the other classes she had ditched.

Beth was not totally unpopular in school, but she was definitely not part of the popular crowds. One of the school cheerleaders did not speak highly of her. She had dated two boys, Adam and Russell, before Merrick. It is obvious that she does pride intelligence over popularity.

It is apparent that she cares deeply for Merrick, and is liked by Merrick’s father. She also shares similar interests with Merrick that led to their arrival at the museum.

She also has at least one friend at school named Marianna. Like her, she does not enjoy Physical Education, or Literature, and had been punished for her bad performance in class. Marianna has also forged notes to get them out of classes they don’t like.

Beth does like to look good, and carries possibly her favorite lipstick with her, Raspberry Passion.

Beth was also preparing to start a new job, at Terrific Taco, showing she does have an idea about responsabilies. 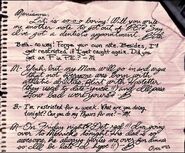 Notes Between Marianna and Beth Page 1

Notes between Marianna and Beth Page 2 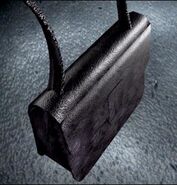 Like Merrick and Professor Windlenot, she was interested in the odd things in the world. It had been a joint effort for them to get into the museum, and even after the Ixupi escaped, she realized that the markings

on the vessels were a clue. She passes this on after her spirit is released. She also leaves notes for Merrick to meet her down in the power room. The security system also records her running down to the power room.

Beth met her death down in the power room. It had been the Fire Ixupi who finally took her life, since her spirit

was found in its vessel. Her body is found down under the fuse box, clutching the last riddle in the museums big riddle chain. Due to the place the body is hidden, Beth‘s body is the last to be found, but when people arrive after the generator blows, her body is the first discovered.

Community content is available under CC-BY-SA unless otherwise noted.
Advertisement